It's about time we talked about something that has been taboo for way too long. Medical Cannabis. Whether you are for or against this subject just take the time to listen to my story.

In the beginning of 2015 my Crohn's disease took a turn for the worst. It was my senior year and should have been one of the best years of my life but ended up being one of the worst. Dealing with the stress of year 12 paired with a chronic illness was something I would never wish on anybody. I deteriorated fast and had to have surgery for a colostomy bag, being a young girl facing this situation was hard to say the least.
Next was the list of drugs that the doctors threw at me. You see, there isn't a cure for Crohn's only drugs that suppress your immune system and work as bandaids but never address the cause. One doctor I had, who in my eyes was completely incompetent didn't even know that a side effect of my drug was hair loss. He was just as surprised as me when he learned that my hair was nearly all gone. Safe to say I didn't go back to that doctor.

Prescription drugs weren't helping me and I wasn't getting much better. The pain of Crohn's disease is indescribable and something you'd only ever know if you've experienced it. I was constantly having to take Codeine or Endone to which I was building a tolerance and only barely masked the pain, which is what led me to cannabis. During my illness my mother has done an endless amount of research, which is something you have to do if you ever plan on helping yourself. She had read of countless stories of people helping themselves with cannabis and it's incredible healing qualities. I was able to get my hands on some and starting using it for pain, and let me tell you it worked better than any pharmaceutical I've ever tried. My nausea was gone, I could eat without pain and I could sleep through the night.
There's so much stigma behind the use of cannabis but until you've ever gone through that kind of pain or witnessed a love one suffer you have no right to judge the choices of others.

So how does it work? It's not just for pain this plant has so many uses it makes more sense to list what it doesn't help! Every person has an endocannabinoid system, just like a nervous system and digestive system. The endocannabinoid system is involved in many processes in your body, including appetite, pain sensation, mood and memory. Your endocannabinoid system naturally produces chemicals similar to those found in cannabis CBD and THC. These chemicals work to pass messages between the brain and different parts of the body through your neurons and receptors. This process creates an environment that disease can't live in. Not only does it help with symptoms it can literally cure disease.

In late 2016 and early 2017 I was able to get my hands on cannabis leaves that I juiced and drank everyday. There are studies being done that show ingestion of RAW cannabis is one of the best ways to get high dosages of the healing cannabinoids. Another great thing about this method is because the chemicals are in the raw form THCA and CBDA there are NO psychoactive effects, which makes it great for children. During these few months I felt better than I have in years. I was finally putting on weight, I was exercising and my Crohn's was going into remission, something I had never achieved with pharmaceutical drugs. I haven't had access for a almost a year and my health is starting to deteriorate again. I can't begin to describe what it feels like to have some hope and it being snatched away because this country can't get its self together and finally legalise this plant.

Right now I'm a part of a Facebook group with 15,000 members all using medical cannabis, and that's just one group, who knows how many Australians out there are using it. These people are all unwell, or know a love one who is ill and they are angry!!! There has been promise after promise from the government to legalise but they keep dragging their feet. The system is corrupt and full of people with hidden agendas. Some politicians have shares in pharmaceutical companies so Its little wonder why some are dragging their feet so much when it's their own pocket that will suffer from the legalisation of medical cannabis. I recently wrote to my local MP, Susan Templeman about this subject and she gave me her full support. She herself feels it should be legalised and sent me this in her response. 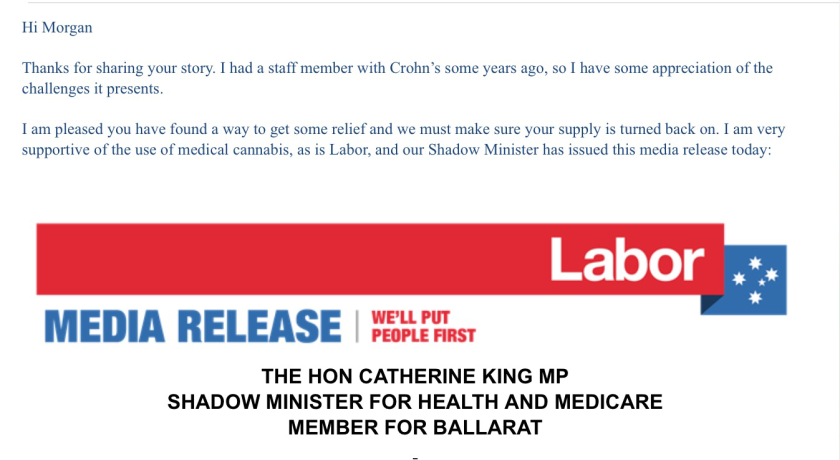 Through this two year journey I have met the most incredible people. The medical cannabis community is full of people who have suffered from illness, know a loved one that has or are simply good people who want to help others. We need to lift the stigma that has surrounded this plant for the past 100 years. In the past it was used freely and helped many people. Not only can it help people's health it could provide new industries and employment. All you have to do is look at countries that have legalised it and just see what it has done for their economy and crime rates. Hemp and cannabis have endless uses, clothing, food, technology they're even working on developing hemp bio fuel!

This is something I'm passionate about because it has changed my life in so many ways. My experience with cannabis has inspired me to help others as a future career.

I'm tired of living in fear along with millions of others.
Coltyn turner, a young American man living with Crohn's disease once said "I would rather be illegally healed than legally dead". It's time for a change and that time is now.